I got out on the middle Deschutes River recently with my good friend and bamboo rod builder, Olivia Elia to try out a couple of bamboo rods.  I chose my 9′  0″  3 wt Euronymphing Bamboo Rod and Olivia took out her 7′  9″  4 wt bamboo rod.  Well, the student outfished the teacher.  Here is one of the very nice browns that Olivia found in this stretch of the river. 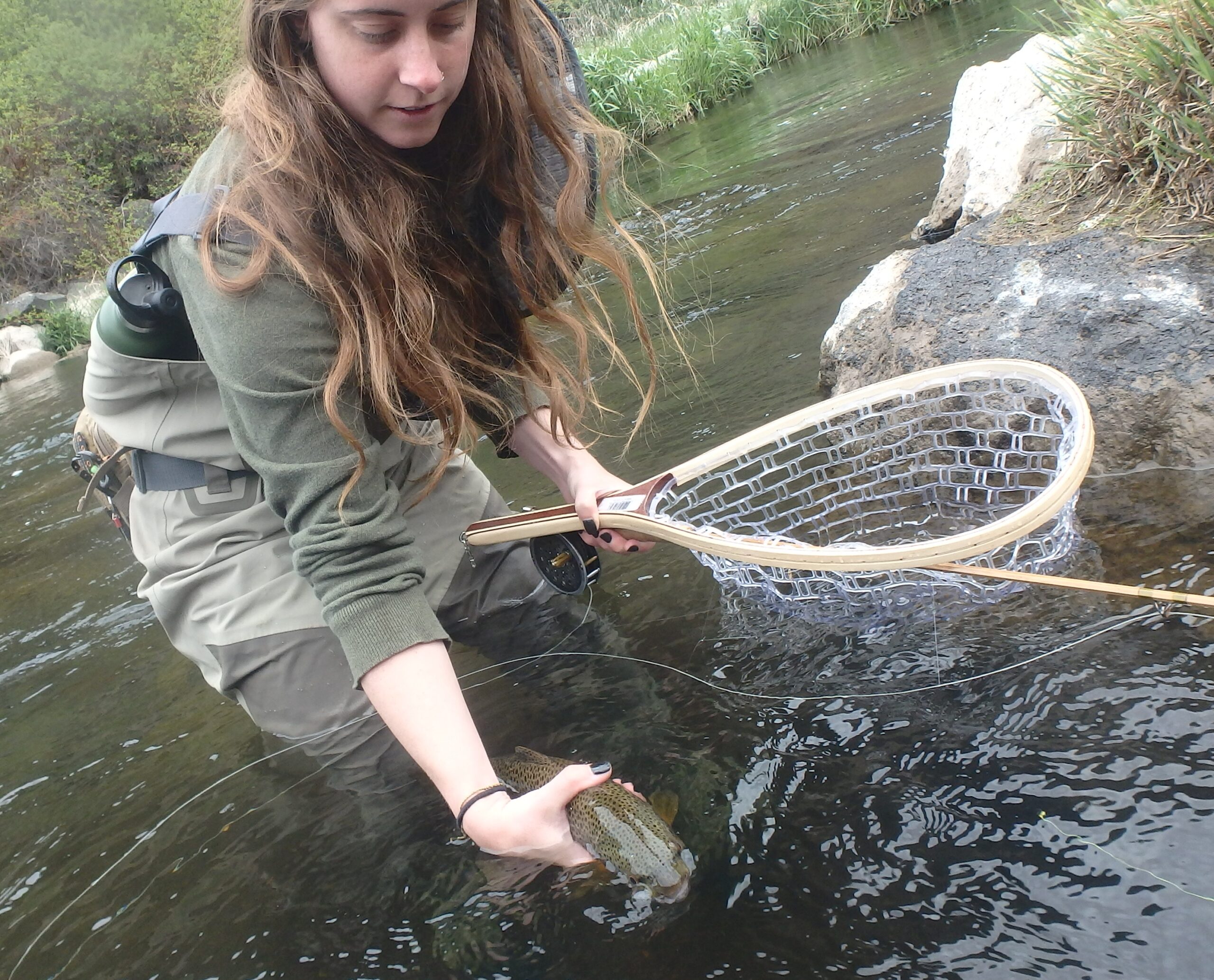 A beautiful Brown that took a #8 stonefly nymph. 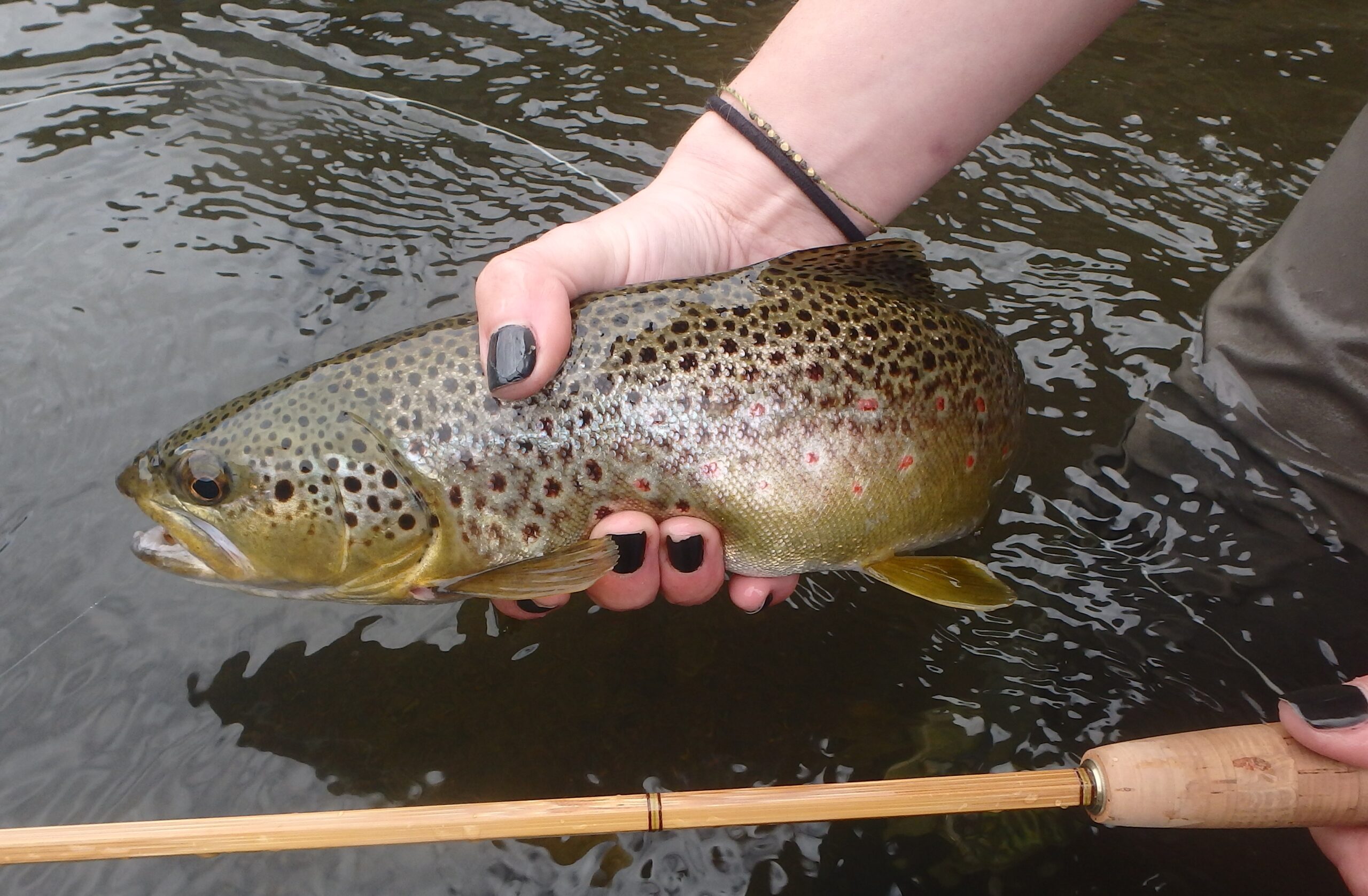 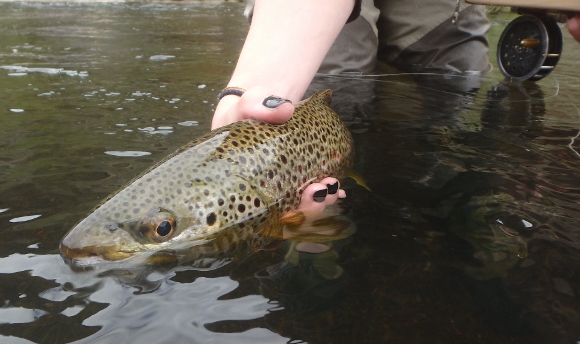 I came across an interesting add in an old archived edition of a Central Oregon Newspaper (The Brownsville Times) this week.  In 1925, a Bamboo Fishing Rod was only $3.25, Leaders (the expensive ones) were 20 cents, and flies were 15 cents each.  Interestingly, Fly Books (the good ones) were $1.90.  Here is a look: 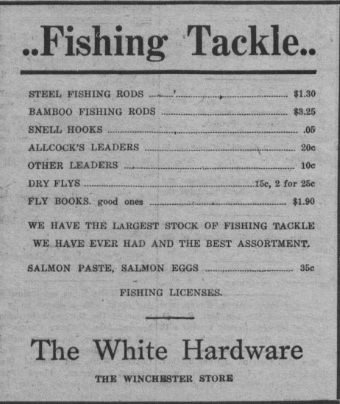 I just got back from my annual “Guys Fishing Trip to Hat Creek” in Northern California.  I’ve been fishing with the same group of guys at Hat Creek on Memorial Day Weekend for the past 30 years.  We probably know every rock in the stream.  Nymph fishing was great in the mornings with #14 yellow sally nymphs fished with Czech Nymphing methods.  I used my 9′  0″  3 wt Czech Nymphing Bamboo Fly Rod and picked up quite a few nice fish in the 15″ to 18″ range.  Here are a couple of photos of our time at Hat Creek. 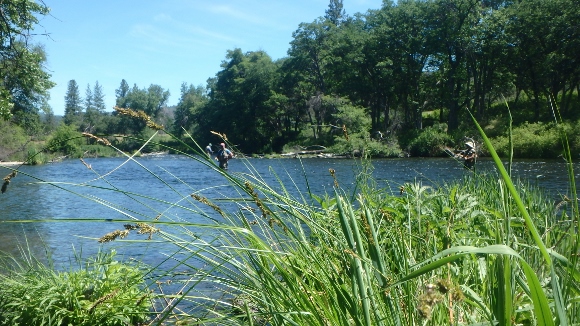 Fishing one of my favorite runs on Hat Creek with Curt, Ken, and Paul. 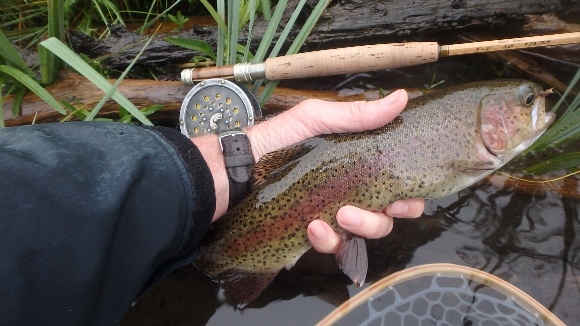 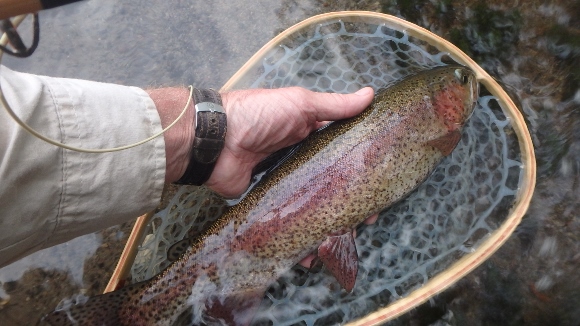 Lots of color on this 17″ rainbow. 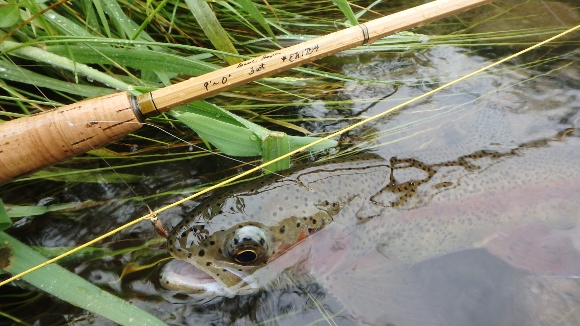 Another pretty 16″ rainbow and my Czech Nymphing Bamboo Fly Rod.

On our trip back from Utah last week, Mary Ann and I couldn’t resist stopping on the Owyhee River for a couple of hours to fish.  It was a blustery, overcast day but we knew the fish were there.  Mary Ann fished her 7′  9″  4 wt Signature Series Bamboo rod, and I choose my 9′  0″  3 wt Bamboo EuroNymphing rod.  There was no visible surface activity, but we knew from previous trips, the big Owyhee River browns usually like small midges and baetis nymphs.  An Olive #20 Baetis nymph fished towards the bottom proved to be a good fly choice for the afternoon, and we got into a handful of very nice fish in the 16″ to 22″ range.  Here are a few photos from our afternoon: 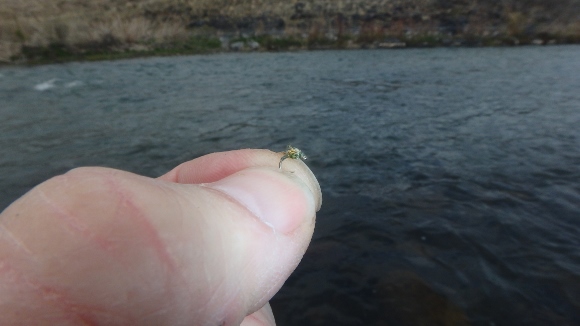 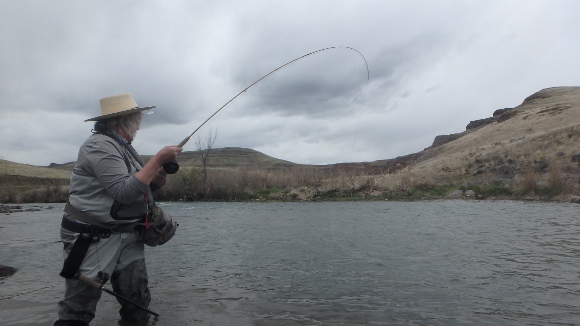 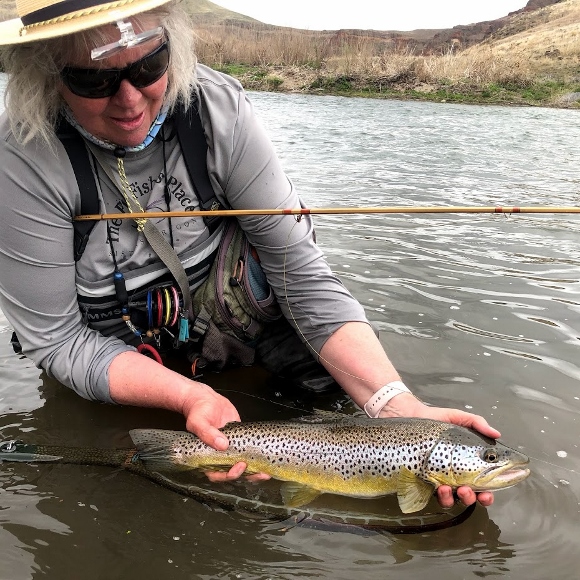 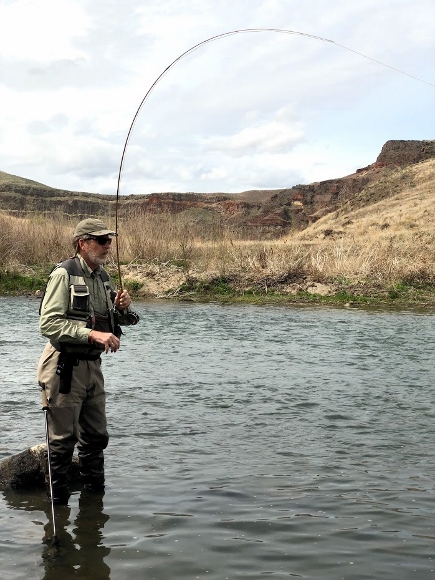 I’m fighting a very nice Brown on my 3 wt bamboo. 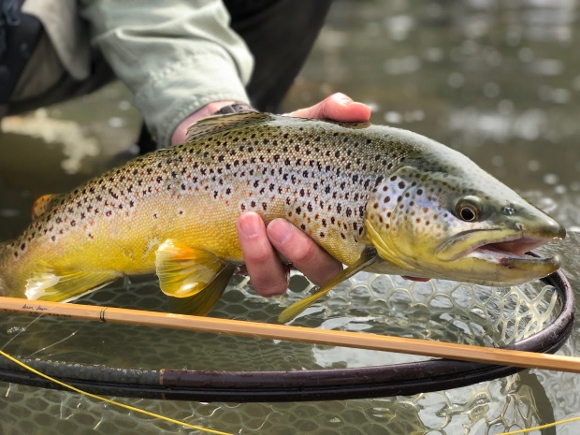 Here is one of my nice fish for the day.

Wow, it’s been a while since I’ve been out fishing….been real busy in the shop with rod building.  Mary Ann just finished building her second bamboo rod, a beautiful 7′  9″  4 wt Progressive Medium-Action rod.  What a great taper…casts dries like a dream.  She cast dry flies hard for a few hours while I took out my 9′  0″  3 wt Czech Nymphing rod with #20 zebra nymphs and Bead Head Pheasant Tail Nymphs.  I picked up several fish on nymphs, but there was nothing hatching and she was fishless on dries.  But, she eventually went over to small nymphs, and her new rod handled them great.  And….she got several fish to the net.  As her first fish on her new rod she picked up a nice 13” whitefish.  After that, several feisty rainbows. Here are a few photos from our day. 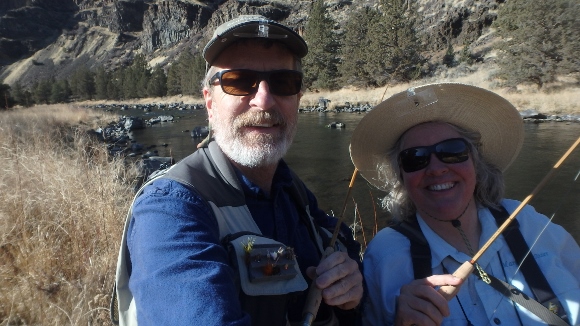 Here we are on the Crooked River this past week. 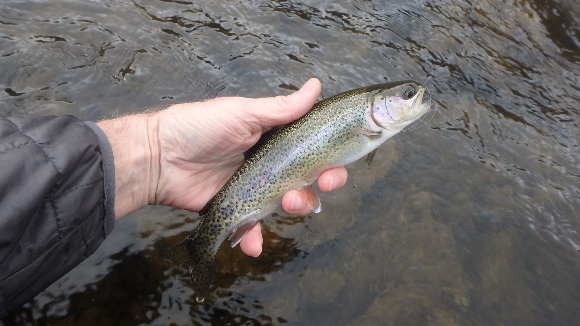 A nice little rainbow that took my #20 black Zebra Midge. 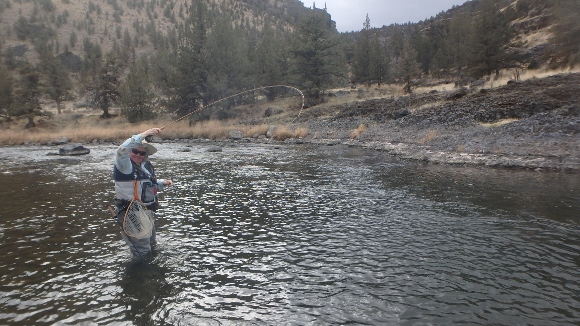 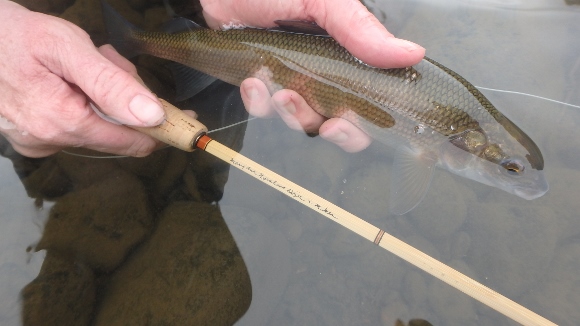 Mary Ann with her first fish on her new rod.

A short video about me.